In January 2018 I started to think about bringing checkpoint/restore support to Podman. After a few initial discussions I started to actually look at the necessary code changes. As Podman uses runc to run containers the initial support for checkpointing containers was implemented pretty fast. Restoring was a bit more complicated as it required additional changes to conmon.

At that point I was able to checkpoint and restore a simple container.

To make checkpointing and restoring containers actually useful the restored container needs to have the same IP address as the checkpointed container. That was the point where the implementation got a bit complicated.

Although having worked on and with different container runtime’s checkpoint/restore support I never had a closer look at the networking setup. It always worked. With Podman it did not at the beginning. The biggest difference is, as far as I understand it right now, is that Podman uses Container Network Interface (CNI) to configure the container’s network. CNI creates a network namespace and after configuring it tells runc to use that network namespace for the container.

So after spending time on runc and CRIU I was able to return to Podman and implement the necessary changes which have been merged into Podman at the beginning of October 2018.

With all the background information out of the way, now finally some examples how checkpoint/restore can be used in Podman. In my example I am using a container running Apache Tomcat with a slightly modified HelloWorldExample. The HelloWorldExample has been modified to return a single integer which is is incremented after each request.

The following starts my test container:

As I am running my tests on a RHEL7 system I have to add --security-opt="seccomp=unconfined" because CRIU cannot correctly handle seccomp on RHEL7. The option --tmpfs /tmp is necessary as tomcat creates temporary files in /tmp which are only correctly restored by CRIU if /tmp is a tmpfs.

Once the container is up and running I can use curl to make requests to tomcat:

I can now checkpoint the container:

Using curl to make requests to the container the result will now not start at ‘1’ again, but continue at the previous value:

As I have been using the --keep flag during restore, Podman has not deleted the checkpoint after the restore, which would be the normal operation. If I reboot the system again I can restore the container again:

And now the result from curl is the same as before:

So right now checkpointing and restoring can be used as either a stateful pause/unpause between reboots or as way to go back in time of the container’s life.

I recorded all those steps in the demo below: 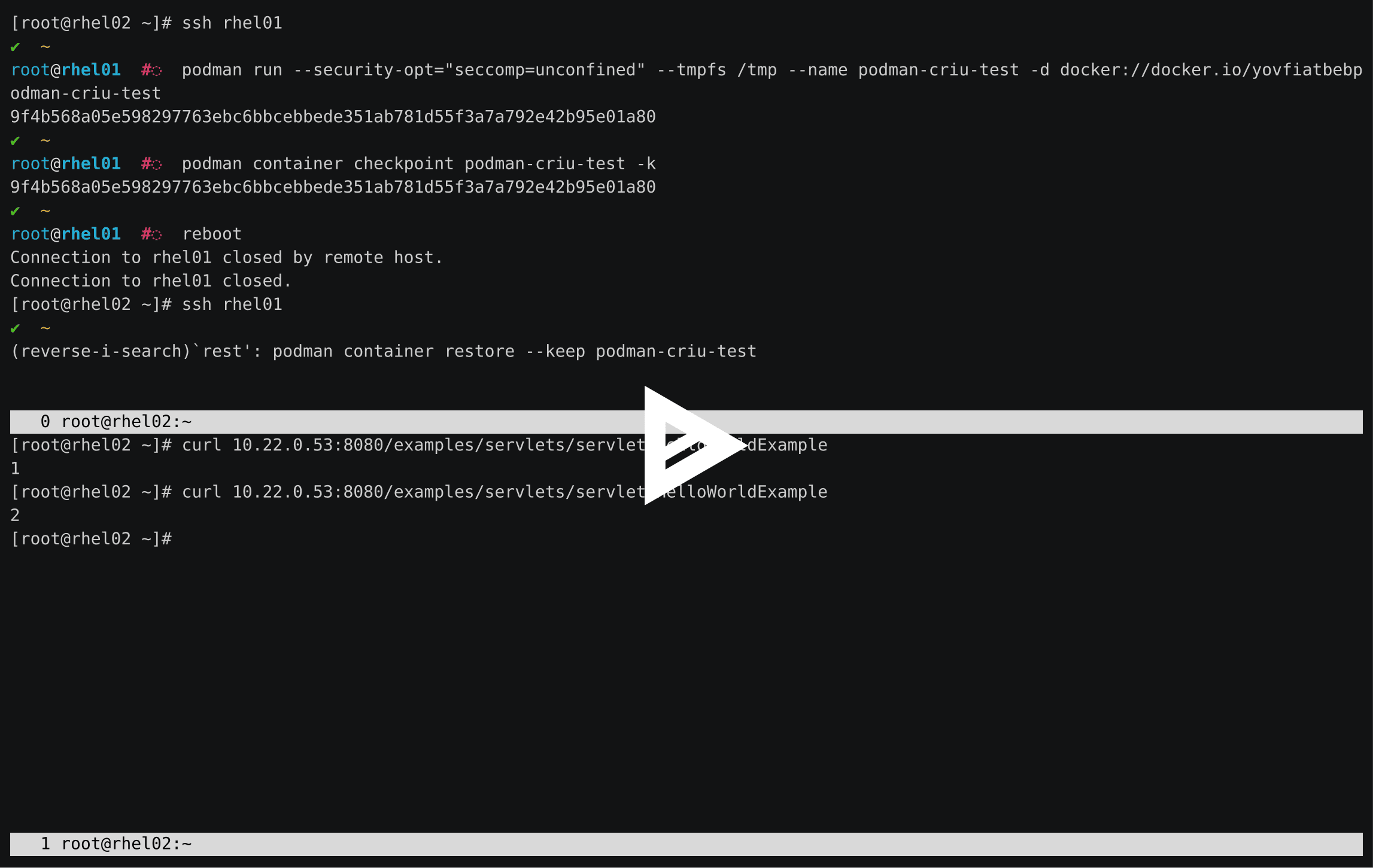 The checkpoint/restore support in Podman is still very new and requires a git checkout of CRIU using the criu-dev branch to work right now. The necessary CRIU changes will be in the upcoming CRIU 3.11 release. runc and conmon also need to be new enough for checkpoint/restore to work.